Author Sue Perkins updates this blog herself. Please leave comments to say what you like about the site, or any suggestions for improvement.

Steam Mountain, the second book in the Rak Shoma series, will be released on
25th JANUARY
It will be available in paperback and ebooks from bookstores and online book sellers. 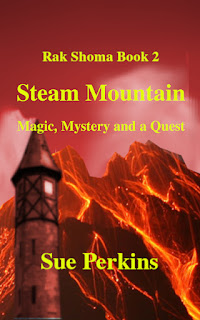 Maevens Ash and Orm's continued search for Ash's parents bring them to the country of Stavmo, a civilization whose power is based on steam.


Steam cars, whirlybirds, and small appliances, even guns, are all powered by steam... but at a cost. A huge factory has toxic smoke billowing into the air, and only the rich are able to escape the smell by living on the opposite side of town. Class is based on your hair color, and if your hair isn't red like the dictator who runs the country, you vanish into the mines or are thrown into the volcano.


But the volcano holds even greater secrets. And possibly a link to Ash's family.


The magical pair make friends with the rebels and try to help them fight for their rights, but in doing so they get separated and place themselves in danger.
Available on 25th January in paperback and ebook formats from Amazon and other online booksellers.
Knight's Keep, the third book of this series, will be released on 25th March 2020 with the final two books available at the end of 2020 and beginning of 2021. Hope you enjoy.

Links to other blogs

Sue Perkins
New Zealand
Hi, I'm Sue and I grew up in Devon, England. My husband and I spent some years travelling the world before starting a family. In 1986 we emigrated to New Zealand and subsequently became New Zealand citizens. My children are now the world travellers while my husband and I live at the top of New Zealand’s South Island. My interests include writing, reading, genealogy and aqua jogging.