Author Sue Perkins updates this blog herself. Please leave comments to say what you like about the site, or any suggestions for improvement.

A girl, a genie, a few demons. Would could go wrong?

Welcome Marva I think the title, log line and excerpt of this book are all enticing and make me want to read the book. Please tell us more about Setara's Genie.

Everyone knows about Scheherazade’s 1001 Arabian Nights. What you might not know is that the stories said to be originated by the King’s wife to keep her murderous husband from killing her are almost all derived from existing folklore and fairy tales.

The main folklore derivation is Scheherazade herself. The frame story of 1001 Arabian Nights is in itself a folk tale. Various stories were added or changed throughout the years. Modern western society likes the cleaned up Disney-style telling. Sir Richard Burton translated from the Persian in the 19th Century to produce a somewhat bawdier version of many stories. Sir Richard was a remarkable character himself, but I just couldn’t work him into the book. I recommend reading about him and also perusing his translations of various works (including the Kama Sutra). Wiki can provide additional details. http://en.wikipedia.org/wiki/Richard_Francis_Burton 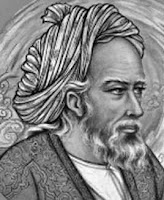 Was Scheherazade a real person? Yes and no. Like Robin Hood, this storytelling queen is a legend herself and may be based on a real person. However, it’s not known for sure. Wiki has a pretty good write up on her: http://en.wikipedia.org/wiki/Scheherazade

Abu Nuwas, who I have used as my story teller, was a real writer/poet in the 8th Century. While my kindly story teller is a poor man who earns a meager living with his tales, the real Abu Nuwas was quite well off and considered to be Persia’s (Iran’s) most famous poet. His reputation wasn’t sterling, and he often found himself in legal trouble. Essentially, he just couldn’t keep his mouth shut sometimes. The Encyclopedia Britannica is a good source of information on the real, and much wilder, Abu Nuwas. http://www.britannica.com/EBchecked/topic/2288/Abu-Nuwas

A more detailed report is in Wiki, but is flagged as potentially unreliable. It does, however, jibe with other information I’ve read about Abu Nuwas.  http://en.wikipedia.org/wiki/Abu_Nuwas

In researching Persian and Arabic lore, I was struck by the concept of the frame story. This is the style of 1001 Arabian Nights. The story of Scheherazade provides a framework for the folkloric tales. I had originally written Setara’s adventures as individual short stories. The first two were published as chapbooks by Sam’s Dot Publishing, then as I added another five tales, all the stories were included in a single collection titled “The Seven Adventures of Cadida.” Once the book’s contract expired, I decided to rewrite the stories and include the frame story to make the whole thing flow more as a novel than a series of short stories.

Eventually, the entire package ended up in the hands of MuseItUp Publishing and is presented now as “Setara’s Genie.”

Abu Nuwas sits in the bazaar on his threadbare rug; a cup and sign proclaim him a teller of tales. For one small coin, he bids passers by to listen. A poor girl, Najda, sells spices from a tray. Would he, she asks, trade a tale for a packet of spice? Abu Nuwas agrees and begins the epic adventures of a girl and her genie.

As did Scheherazade before him, Abu leaves Najda hanging in the middle of each yarn to keep her coming back. Between stories, he questions the girl about her life. He discovers that she’s been promised in marriage to an old man whom she hates, but she must wed him to save her sick mother’s life. The rich bridegroom will pay for the doctors the mother needs. Meanwhile, Najda sells spices in the market to earn enough money to keep her mother alive.

He relates the adventures of the bored daughter of a rich merchant, Setara, and her genie, Basit, as they encounter the creatures of legend and folklore: a lonely cave demon seeking a home; a flying, fire-breathing horse who has lost his mate; a dragon searching for his family; an evil genie hunting for the man who put him in a lamp; and a merboy prince cast out of his undersea kingdom. 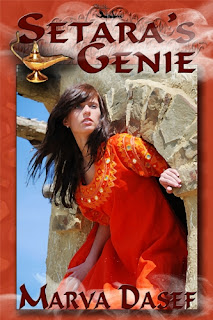 “Oh, goodness. Look at how low the sun sinks. I’m afraid we’ll have to continue tomorrow.”

Najda made a sad face. “I know how you are. You’re just like Scheherazade leaving the story hanging to keep the sultan from killing her.”

“I have met the lady. She was quite clever that way.”

Najda’s eyes grew wide. “You’ve met Scheherazade? That’s fantastic. Where is she? What is she doing now? Does the sultan still love her?”

Abu Nuwas patted the air with his hands. “Calmly, calmly. That was many years ago. She was old; I was young. But, yes, the sultan still loved her to the moment of her death. His heart broke, and he died within days himself.” He shook his head sadly. “A tragic tale in and of itself, yet the sultana left the world with so many delightful tales.”

“She certainly did. A thousand and one stories. Do you know that many, effendi?”

“Of course!” Abu Nuwas put his hand to his chest and bowed his head. “I know every story. Did you know that she did not make them all up?”

“It’s true.” He winked at Najda. “It was how she told them that made them so special. I still seek to be as good a teller of tales as she.”

“And in that tradition, you’ll tell me to go home now and come back tomorrow. Is that right?” Najda heaved a deep sigh. “I should have learned that by now.”

Abu Nuwas smiled. “You’re an adept learner, my child. Go home and take care of your mother. I’ll see you on the morrow.”

Najda stood. “Of course.” She walked away until she was hidden within the crowds bustling through the marketplace.

Abu Nuwas pushed his old bones to a stand. He had to bide his time with this tale and hope he would hear from his friend soon.

Bio: Marva Dasef is a writer living in the Pacific Northwest with her husband and a fat white cat.  Retired from thirty-five years in the software industry, she has now turned her energies to writing fiction and finds it a much more satisfying occupation.  Marva has published more than forty stories in a number of on-line and print magazines, with several included in Best of anthologies. She has several already published books and the Witches of Galdorheim Series from her super duper publisher, MuseItUp.

Welcome Marva, glad you could drop by.

What a great storyline, Marva - and I love that cover!

The cover is as great as the pages that fill the book. I really enjoyed reading it. It did take me back to the Arabian Nights stories.

Good job of weaving this tale. It held me.

Thanks for having Abu come on for a bit. He's a very interesting historical character. I couldn't resist using his name for my story teller. The real Abu would be partying hardy at the Sultan's Palace.

Looks like another super story, Marva. Congratulations. I just finished Midnight Oil and enjoyed it so much.Review coming.

Links to other blogs

Sue Perkins
New Zealand
Hi, I'm Sue and I grew up in Devon, England. My husband and I spent some years travelling the world before starting a family. In 1986 we emigrated to New Zealand and subsequently became New Zealand citizens. My children are now the world travellers while my husband and I live at the top of New Zealand’s South Island. My interests include writing, reading, genealogy and aqua jogging.